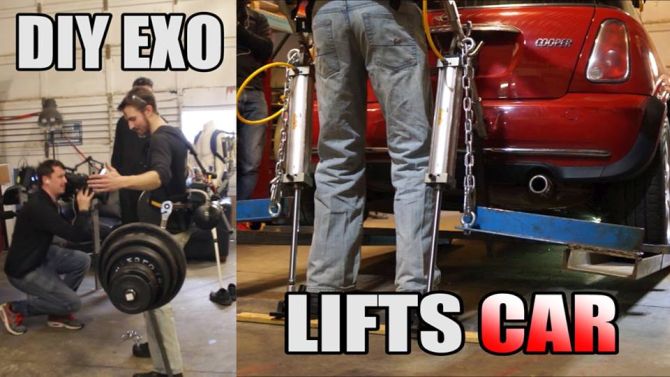 James Hobson, a Kitchener, Ontario-based inventor has built an exoskeleton and demonstrated its strength by lifting a Mini Cooper almost a foot off the ground. Inspired by Iron Man, the homemade exoskeleton lifted the Mini Cooper weighing 2,524 lbs in front of a German TV crew. The video posted on his YouTube channel The Hacksmith impressively showcases how the suit’s pneumatic legs use a set of pistons to lift the weight of the car. The legs of the exoskeleton are rated for about 700 kilograms, although lifting Mini Cooper’s rear wheels was just 360 kilograms.

Equipped with its own battery pack, the self-powered suit comes with a pair of 63 mm bore diameter pneumatic cylinders. These are capable of generating 125 PSI and can lift over 800 lbs (360 kg) each.  Hobson is yet to start work on the upper part of the Iron Man-inspired exoskeleton. He had been collecting parts from almost two years to build the lower portion of the wearable. The much needed motivation to finish the project quickly was provided by German TV show Galileo coming to shoot the Mini Cooper lift.

James Hobson a.k.a. the Hacksmith is building exoskeletons from the past two years and has created many prototypes. Last year, he built an upper body exoskeleton that was inspired by the one worn by Matt Damon in sci-fi movie Elysium. He lifted 170 lbs with it and after a little up gradation; he demonstrated the suit on television where he curled 275lb Olympic weights. 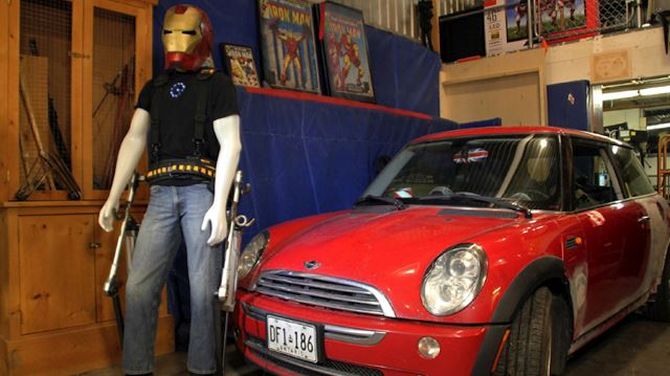 After quitting his job, he now fully concentrates on building the exoskeletons and making videos for his YouTube channel. Hobson is planning to exhibit his Iron Man-inspired homemade exoskeleton for Discovery Channel’s Daily Planet show by lifting a truck (680 kilograms lift) on Monday.