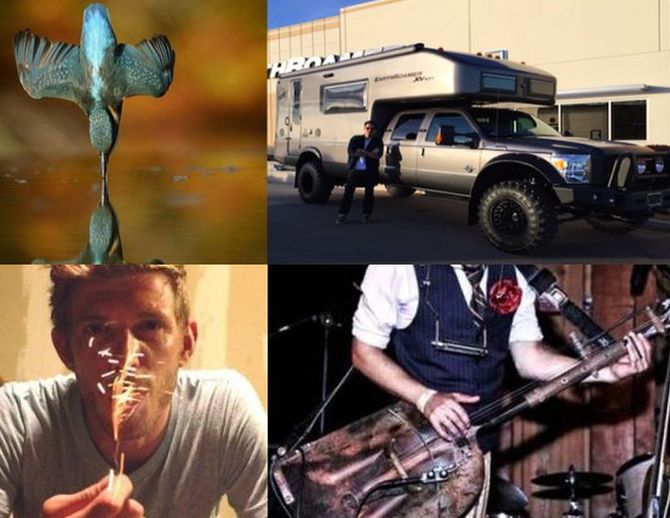 It has been a really enlightening, entertaining and inspiring year for MyCoolBin. As we redesigned our website this year and faced few technical glitches, but new ideas had to follow a fresh format. So, we’ve spent major portion of the last 365 days to slowly but steadily strengthen our online presence.

We have been working hard to bring some of the coolest, informative and trending stories from around the world for our readers. However, we also ensure that our passion for autos, music instruments and gadgets is also reflected through the stories we feature on MCB.

Now on the last day of the year, we look back at some of our favorite stories from 2015. Here they are. Enjoy! 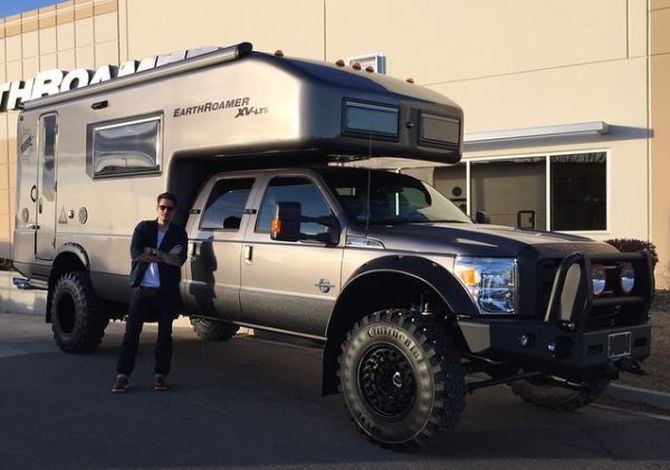 37-year-old American singer-songwriter John Mayer has bought a new super-cool and luxurious EarthRoamer XV-LTS for himself, right in the beginning of the year. Based on Ford’s F-550 chassis, the custom mobile home is manufactured by Colorado-based EarthRoamer and is believed to cost John around $500,000. The EarthRoamer XV-LTS is about 27-feet long, weighs 7 tons and has a wheelbase of over 5-meters. Moreover, the interior is spacious and all decked up with luxurious equipments to provide utmost comfort to the popular celebrity. 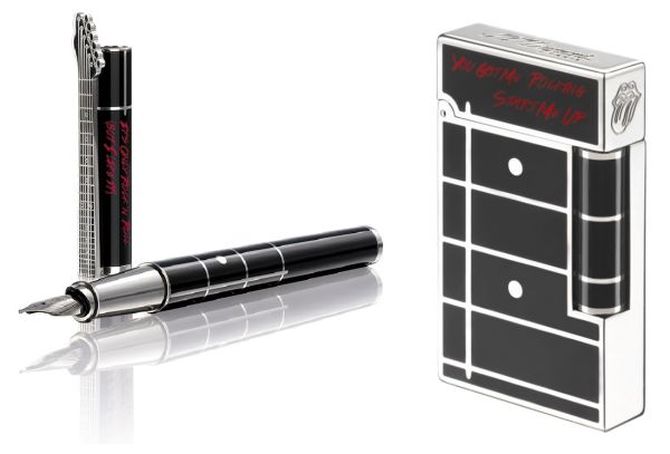 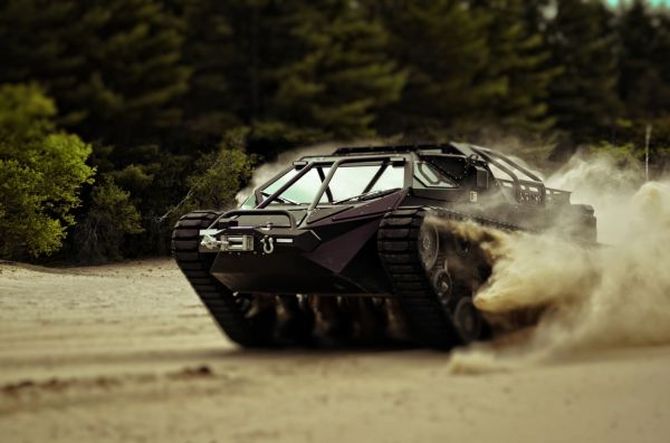 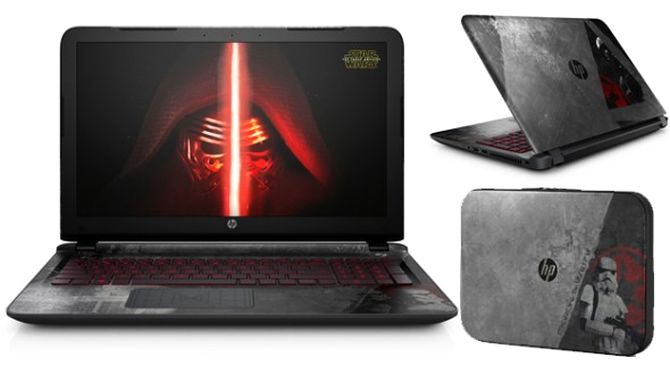 Hewlett Packard had also joined the dark side of ‘The Force’ and brought the energy into special edition Star Wars laptops. Inspired by the epic space fiction franchises, the special edition Star Wars laptop features black and gray encasing that’s reminiscent of the Galactic Empire’s spaceships. Moreover, its cover-print boasts Darth Vader along with HP logo on the lid.

Ford’s latest racing simulator will give die-hard gamers the most realistic experience, like never before. It uses linear servo actuators that produce real racing conditions. There are three big-screen monitors at front, which unfolds real driving actions before you. Moreover, 500-watt audio system is installed into the gimmick to produce actual racing sounds, thus helps you to get more into your virtual reality.

Designer and violinist Laurent Bernadac has successfully 3D printed the world’s first electric violin dubbed 3DVarius, which is based on iconic model of Stradivarius violin. It is 3D printed from CAD file (a dollop of polymer at a time) and has undergone various prototype phases before the final design that is able to withstand extreme rigors during performance. 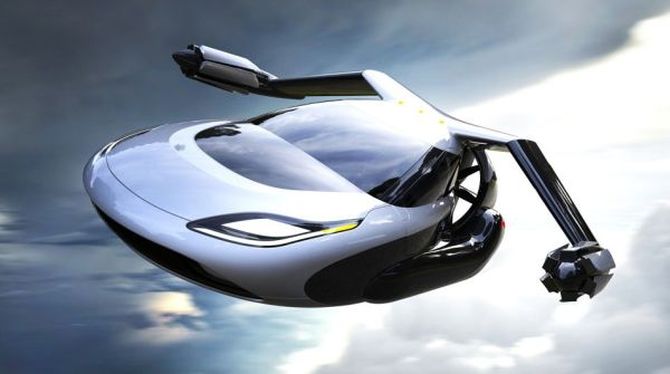 US-based company Terrafugia has been planning and working for years on development of the TF-X flying car. Terrafugia has revealed this amazing car concept back in 2006 and now upgraded its previous conceptual version. However, the latest TF-X comes with electric ground drive and electric power assist for smooth taking off and landing. It is designed to use helicopter-like propellers for lifting the car off the ground. 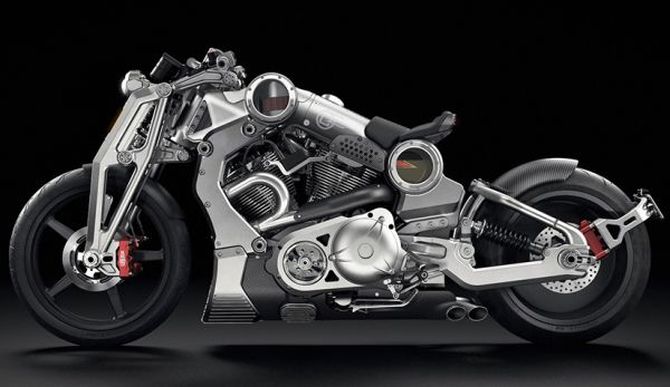 Confederate Motors has contrived the P51 G2 Combat Fighter motorcycle, inspired by 1960’s chopper inspired muscle bike rides. It is built entirely out of 6061 aerospace billet aluminum, right down to the unitized engine block and heads, the futuristic chopper produces a massive 200 horsepower from a big-block, air-cooled, push-rod, V-twin engine.

Australian startup Outback Logic LLC has come up with the all-new Siesta 4 Tent, which is designed to blocks excessive sunlight and heat. It is made out of ultra-reflective fly fabric that looks like a shiny metal. This metalized fabric with double-wall design can effectively reflect UV, visible and infrared rays to keep light and heat out of the tent, forming a radiant barrier. So, it allows the inhabitants sleep without being disturbed by overheating, even during hottest summer days in desert areas.

10. Shovelman and his shovel guitar

Portland-based DIY musician Shovelman has beautifully turned an old shovel into a harmonious guitar. This folk superhero draws psychedelic rock music out of a barn shovel that is turned into a harmonious slide guitar. Yes, you read that right! This guitar is made out of old shovel found at a lumber and this is the reason why the guitarist is also named so. Check out the musician playing tunes out of this shovel guitar. 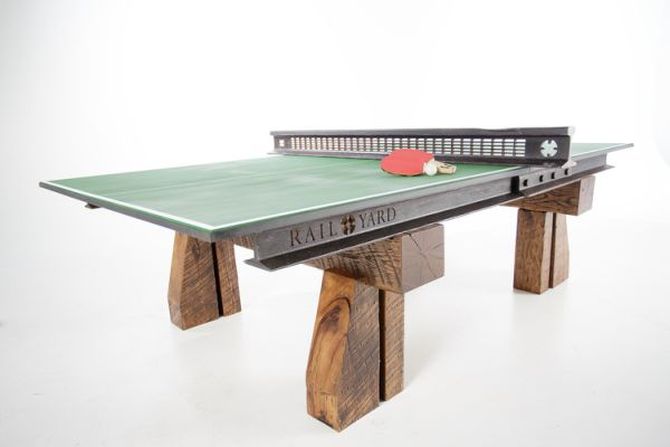 Rail Yard Studios has created one-of-a-kind ping pong table that’s made out of reclaimed railroad steel and timber. The side rails of unique ping pong table are more than 100 years old and were produced by Tennessee Coal & Iron Company (TCI Co). Moreover, other materials are also age-old and industrial. 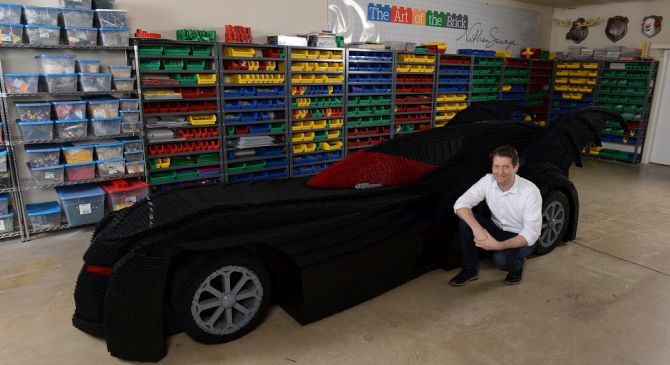 To celebrate 80-year history of DC comics, Lego enthusiast Nathan Sawaya has unveiled the world’s largest Lego Batmobile. Made from exactly 500,000 LEGO bricks, the 18-foot-long life-size replica of the Batmobile is one of the greatest creations by the artist. 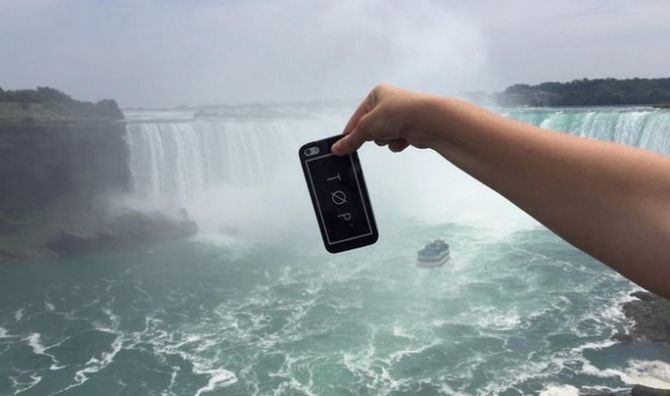 This year we also witnessed one of the craziest internet trend- Extreme Phone Pinching. This crazy fad urged people to put their expensive smartphones at risk. People from different corners of the world participated in this craziness, risking their smartphone for getting attention on social media network. 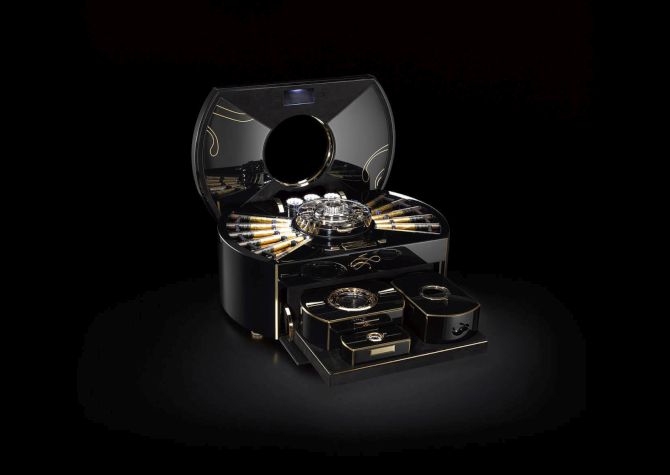 Dubbed Emperador cigar chest, this piece of art by Imperiali Geneve is undoubtedly the most exclusive and prestigious cigar chest ever to be designed and produced. That is why this one-of-a-kind masterpiece comes with a staggering price of one million Swiss francs ($1,013,890). Entirely hand-produced by a master watchmaker in the Swiss Jura, it comes with a delicate “Clous de Paris guilloché” dial. 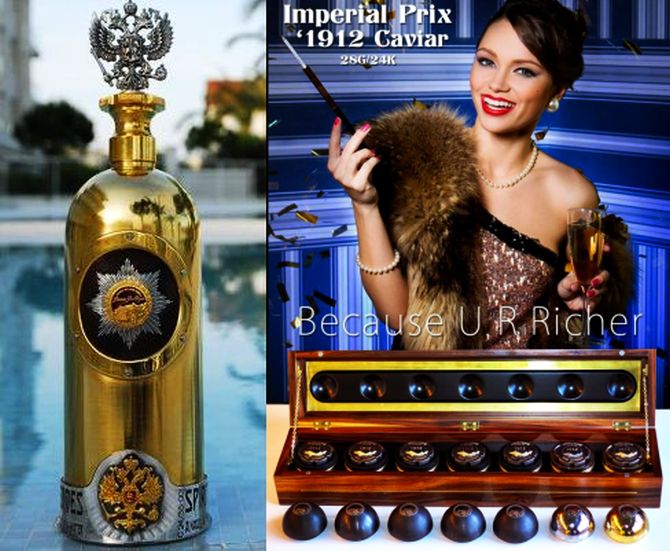 Created by Russian car maker Russo-Baltique, the premium vodka and caviar are the most expensive in the world. To commemorate the 100th anniversary of the company’s factory, the Russo-Baltique Vodka was created as well as financed by Princess Regina Abdurazakova of Kazakhstan. 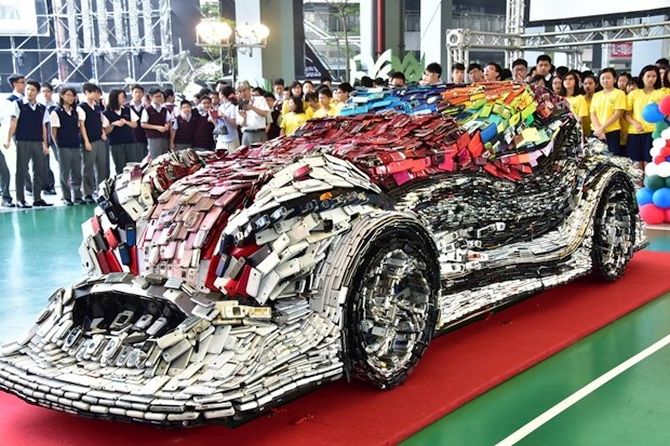 Lin Shih-Pao, a Taiwanese artist, has built life-size model of Formula 1 race car from 25,000 recycled mobile phones. Intended to spread environmental awareness, it took the 53-year-old artist about four months to complete the unique project. It demonstrates how a pile of trash can be recycled and transformed into a piece of modern art.

Guitarist Cooper Carter has recently uploaded a video on YouTube, in which he brilliantly covers all 31 parts of Star Wars theme on guitar, solo. Originally, the theme song is composed with full orchestra, including the trombone parts, the oboe parts, the flute parts, the violin, viola parts, and the list goes on. But the creative guitarist has played the entire orchestral parts himself. 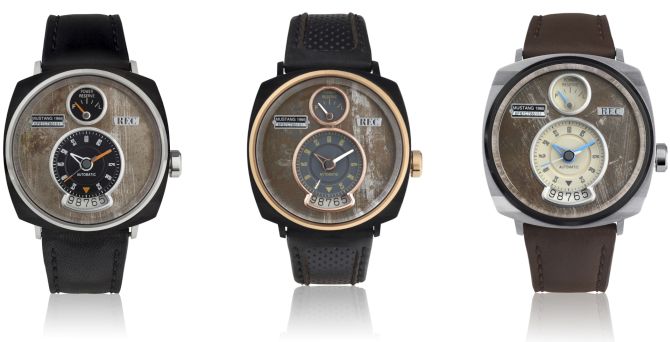 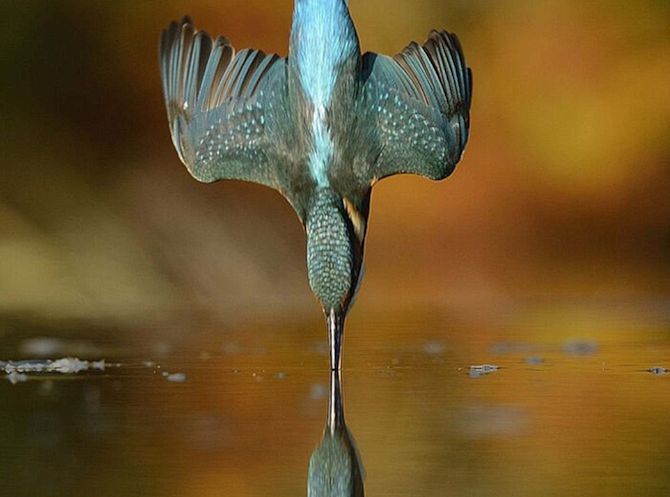 Alan McFadyen, a devoted wildlife photographer took almost 6 years to capture the perfect shot. The 46 year old spent 4,200 hours and 720,000 photos to capture the picture of a kingfisher doing a flawless dive into the water, without a single splash. The pictures are really astonishing and flawless. 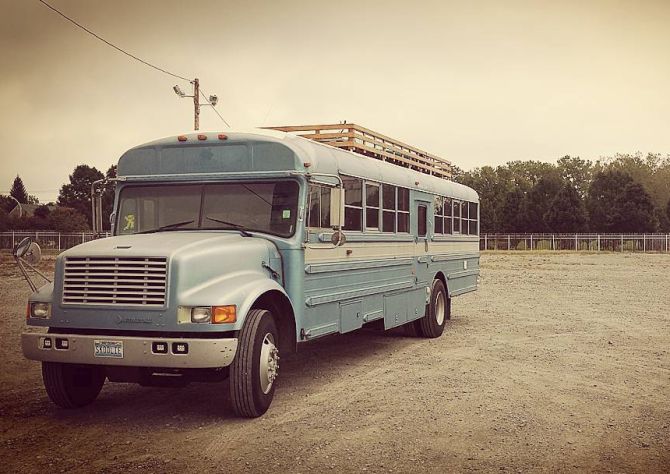 Patrick Schmidt, who goes by the name Skoolielove, has converted a school bus into a motorhome to travel and explore America. The travel story started when Schmidt bought a 1990 School Bus, nicknamed Big Blue at the beginning of March for 4,500 USD in Long Beach California. After picking the bus, he went to his parents’ house in Vegas and started converting it into a tiny motor home at the beginning of May. The resulting mobile home is truly striking and comfortable at the same time. 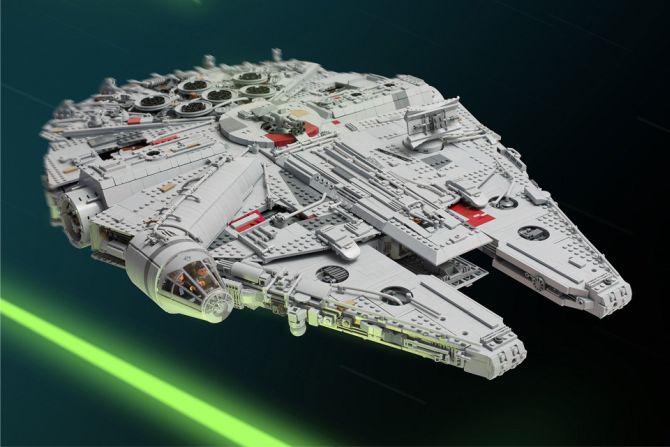 Lego builder Marshal Banana has redesigned the iconic spacecraft Millennium Falcon with 7,500-pieces of Lego. Plus, it is integrated with functioning lights, gun turrets, cockpit, working boarding ramp and finely detailed underside for more realistic touch. It is bigger than the official Lego set for The Force Awakens’ Falcon that consists of 1,329 pieces.

UGears creates modular mechanical models from high-quality environmentally-friendly plywood. Offering unique mechanical 3D models for self-assembly without glue, the brand’s mission is to give an unforgettable time of working together on things that are popular for all ages. Check out these self-moving wooden models in the video above. 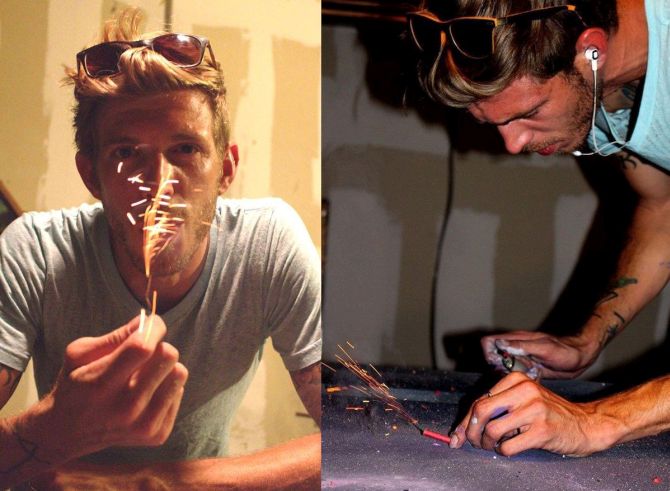 Explosionism is the cool, modern art by Drew Lausman. US-based artist makes brilliant use of fireworks to create various landscapes, planets, space-scapes and galaxies. This unusual process of making art involves dipping the firecrackers in paint and then blowing them against the canvass. Though, it sounds bizarre, but this is how Drew has crafted 200 paintings in four years. 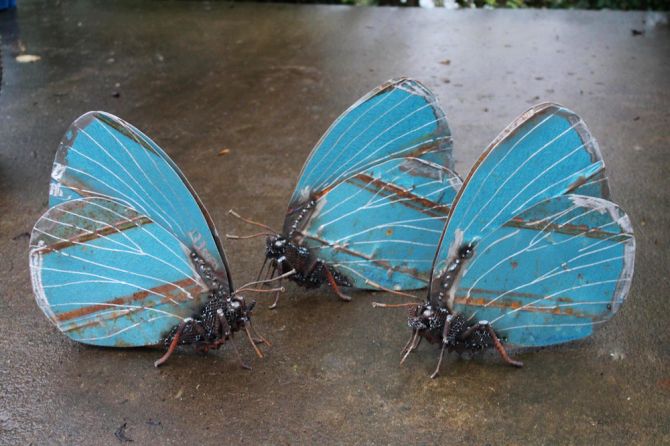 Wales-based sculptor John Brown brilliantly transforms unused metal materials into intricate bird and bug sculptures. At first glance, you can’t figure out that these are actually made out of spare pieces of metal. Using salvaged materials like nails and bicycle chains, the artistic sculptor has managed to create highly-detailed anatomy of beautiful and delicate creatures.

Connecticut-based artist David C. Roy has been creating various dynamic wall-mounted wood sculptures from past thirty years. The limited edition wall installations may appear like inner working of a mechanical clock, but these are basically spring-driven kinetic wood sculptures that are capable of spinning from five to 15 hours constantly.

So, that was the amazing recap from past 365 days. We’ll be working even harder in 2016 to acquaint you with latest happenings around the globe. We really appreciate your love and support. Feel free to give us your feedback and suggestions through email or on our Facebook page.