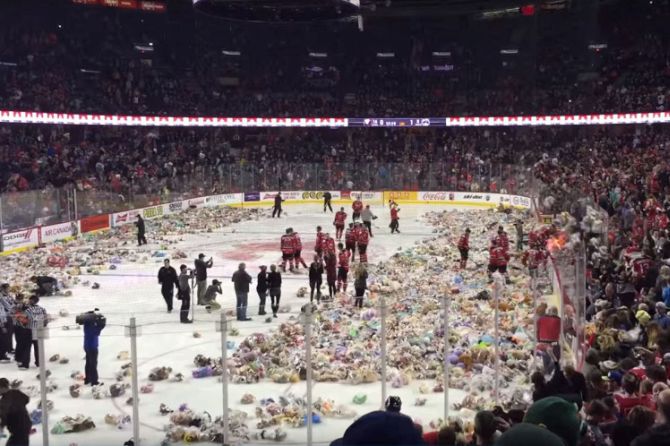 Ever heard about Teddy bear toss? If not, let me tell you it is a popular Christmas season promotion at hockey arenas throughout North America. Fans are encouraged to bring teddy bears to the game and as the home team scores its first goal, the fans throw them onto the ice rink. The toys are then gathered up to be donated as Christmas presents to hospitals and children charities. This past Sunday, Calgary Hitmen of Canada’s Western Hockey League celebrated their annual Teddy Bear Toss which saw 28,815 teddies being thrown onto the ice, therefore setting a new club record.

The arena was packed with 19,289 spectators who were instructed to throw the toys onto the ice whenever the team will score its first goal.  The fans had to wait until the second period when 18-year-old Jordy Stallard scored first goal for the home team. As the goal was scored, the place erupted with excitement and fans started throwing the teddy bears onto the playing field. An astonishing sight to watch, the Teddy Bear Toss certainly gave people present there a memory to cherish for their lives. 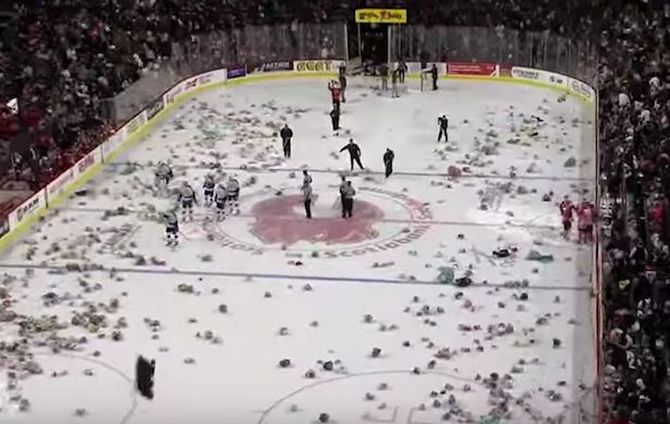 A 37-minute delay was caused as players, staff, volunteers and team officials joined to collect the stuffed animals. All these toys will be distributed in around 50 local children’s charities. The Calgary Hitmen has hosted the Teddy Bear Toss event every year since 1995 and has raised 300,000 stuffed animals for local charities.