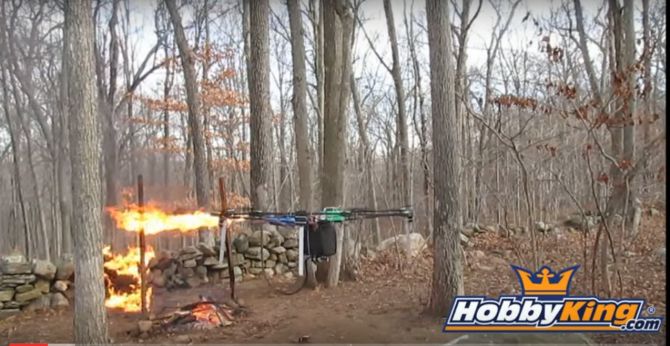 Drones and fun and in recent times have become a great source of entertainment. Especially for teenagers with a creative mind, they can be used to do something cool and bizarre. One such innovative guy is Austin Haughwout, a 19-year-old teen from Connecticut who after posting a video of a homemade drone firing a handgun few months back took the internet world by storm. Well, the teenager is back once again and this time he has gone further ahead in terms of craziness with his latest drone experiment.

In a new video posted on Haughwout’s YouTube page, a drone with a flamethrower is seen roasting a turkey from various angles. Titled ‘Roasting the Holiday Turkey’, the four minute long video has been sponsered by HobbyKing whose logo appears significantly on the footage. The online retailer also provided the drone parts such as motors, propellers and electronic speed control for the device. The flame throwing drone also included significant number of 3D printed parts, wiring, soldering, and miscellaneous parts.

The four-minute video shows the drone fitted with a flamethrower hovering about 4 feet in the air and shooting fire flames onto the turkey. According to Haughwout’s father, the whole experiment was done safely by taking every necessary precaution. He said they had buckets of water, fire extinguishers and hoses to ensure nothing went out of hand. Also, the area was cleared of extra leaves beforing starting the stunt.

Although, the last act of gun-shooting drone was given a clean chit after an investigation done by the FAA. Well, as for this flame throwing drone stunt, it is still unclear whether the FAA or local law enforcement will open an investigation or not.