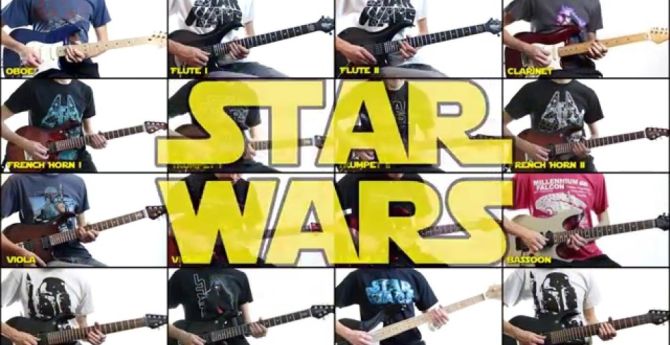 We’re well aware that Star Wars Episode VII: The Force Awakens is going to hit cinemas next week. However from past few weeks we have seen numerous fan tributes flooding the internet, but this musical homage is truly the most epic piece of work so far. Guitarist Cooper Carter has recently uploaded a video on YouTube, in which he brilliantly covers all 31 parts of Star Wars theme on guitar, solo.

Originally, the theme song is composed with full orchestra, including the trombone parts, the oboe parts, the flute parts, the violin, viola parts, and the list goes on. But Carter may have thought ‘why to utilize whole orchestra when he could play each harmonious instrument on his electric guitar?’

He played all the parts in 31 different videos and finally clubbed them together. The resulting piece is simply mind-blowing. This guitar orchestra version is indeed one epic tribute to the greatest saga of all time, and a brilliant match to John Williams classic theme. What do you think about this latest internet fad? Spare a thought about Carter’s jaw-dropping guitar orchestra.