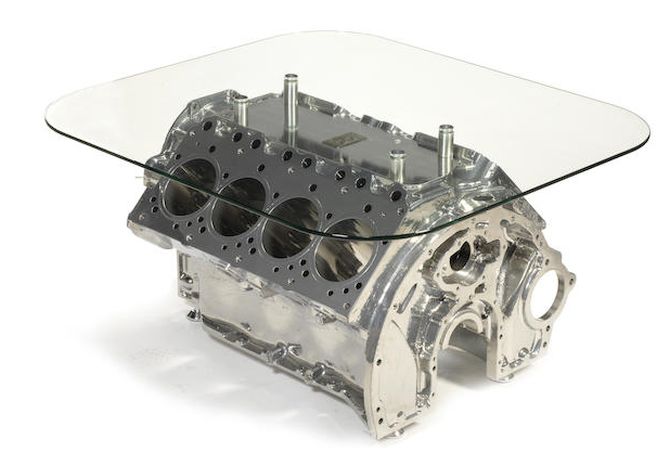 If you happen to be a revhead, we have something cool for you. How about a coffee table for your living room made from a Rolls-Royce 6.75 V8 engine? Yes, British auction house, one of the world’s oldest and largest auctioneers of fine art and antiques is just offering one. Made from a Rolls-Royce 6.75 V8 engine, the one-of-a-kind coffee table is being offered by Bonhams as part of its Collector’s Motor Cars, Motorcycles and Automobilia auction. The rare piece of furniture will go under hammer on December 10, 2015 and is expected to fetch a handsome sum between £800 and £1,000.

The Rolls-Royce 6.75 V8 engine cylinder block coffee table is crafted from the engine type produced at a factory in Crewe, England. These L series styled V8 engines were used on Rolls-Royce cars prior to their purchase by BMW in 1998. A modern derivative of this engine is still produced today in Crewe and goes into the Bentley Mulsanne.

The engine has been stripped down with studs removed and all the old engine oil is also removed using a three stage chemical process. It is then shot blasted and powder coated in chrome to offer a highly polished finish. Raised on table feet, it is fitted with white LED lights (requires 3 x AA batteries) and a Rolls-Royce badge is applied at the top. The engine is attached to a British standard certified table top glass measuring 830mm x 750mm and is finally secured down by four thumb bolts into specially machined mounting points.

The Rolls-Royce V8 engine cylinder block coffee table will be up for auction on December 10, 2015 at the Collector’s Motor Cars, Motorcycles and Automobilia auction and is expected to o fetch £800 – £1,000.