The batman fans must be waiting eagerly for the release of the new batman movie, The Dark Knight Rises which is scheduled to hit the screens on 20th July 2012. However we have something for the diehard fans that will fulfill their batman fantasies till then. 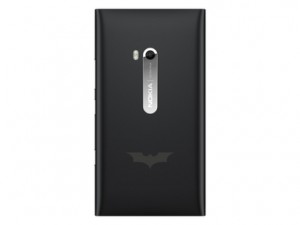 Nokia has just revealed that they will be launching a special edition Lumia 900 Bat phone. A picture of the phone was posted on tweeter with Batman logo carved into the back of the black model of the Lumia 900. Nokia has teamed up with the makers of the Batman to produce this limited edition phone which will hit the markets of UK, France and Germany along with some other parts of Europe.

This is the second time Nokia has released a Batman themed phone after Batman Nokia Lumia 800 was launched back in December. However that time the phone was not for sale for general public. So this time, be ready if you want to get your hands on one of these limited edition Bat phone and act like a real life hero at least in front of your friends.