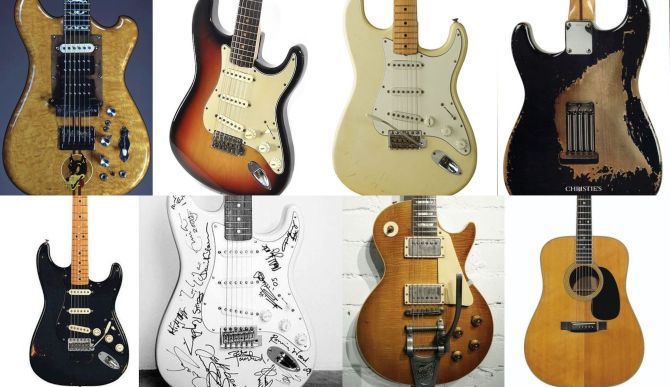 We have showcased lots of cool guitars here in the past. However, it’s been a while since we have featured any of these fretted instruments here. One of the world’s most popular musical instruments, guitar is the certainly the primary instrument used by musicians and bands all over the globe. There are many guitars that have gained so much fame because of the iconic musicians who use to play them. When auctioned, some of these six string instruments have fetched massive prices. Today, we are bringing to the 11 most expensive guitars in the world.

It was one of Eric Clapton’s favorite guitars which he first played live on 13 Jan 1973 at the Rainbow Concert. It was made using parts of three different guitars by Nashville Luthier Ted Newman Jones. Blackie was retired in 1985 after ‘Behind The Sun’ tour because of some issues with its neck. Blackie was auctioned for $959,500 in 2004 at a Christie’s to support the Crossroads Centre. It is a drug and alcohol addiction rehabilitation centre founded by Clapton. 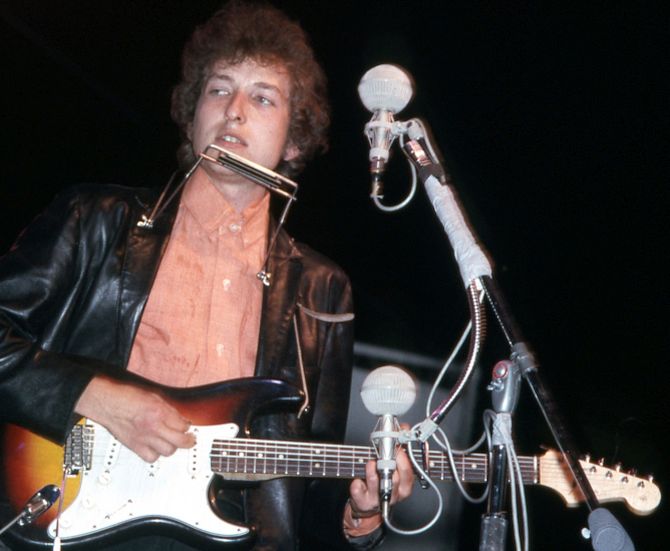 At number nine on the list of most expensive guitars in the world is Bob Dylan’s 1964 Sunburst Fender Stratocaster. Marking his shift from acoustic to electric, this guitar was played by Bob Dylan at 1965 Newport Folk Festival. It was sold for record-breaking $965,000 at Christie’s auction house in 2013.

This famous Les Paul guitar was bought second-hand by the co-founder of Rolling Stones. Richards played this guitar at Rolling Stones first TV performance on the Ed Sullivan show. This 1959 Les Paul with a retro-fitted Bigsby and sun-burst finish went for $1 million in an auction in 2003.

As a part of 120 guitars collection auctioned by Pink Floyd’s guitarist, the 1969 Martin D-35 acoustic was sold for massive sum of $1,095,000 in June 2019. It was considered to be his most trusted and favorite guitar. This guitar is featured on “Wish You Were Here” which is one of the most famous tunes of the band. The Martin D-35 acoustic guitar was auctioned at Christie’s on 20 June 2019. 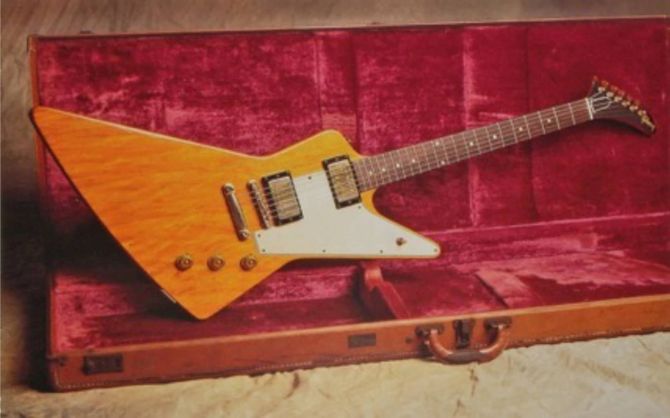 This beauty was owned by legendary guitarists such as Metallica’s Kirk Hammett, Slash and Rick Nielsen. This guitar is one of 19 Explorers produced by Gibson in 1958 which is why it was sold for a high price. Built from Korina and PAF humbucker pickups, this Gibson is at number 7 on our world’s most expensive guitars list.

One of the pioneers of reggae music, Jamaican singer-songwriter Bob Marley is still one of the most famous musicians in the world. You’ll be surprised to know that he only owned seven guitars in his entire life. One of these is the custom made Washburn 22-Series Hawk which he gifted to his guitar technician, Gary Clausen. This guitar is classified as a national treasure by the Jamaican Government which purchased it at an auction for $1.2 to $2 million.

Built by Luthier Doug Irwin, this guitar is one of the 5 custom guitars built by him for Jerry Garcia. The guitar derived its name from the distinctive inlay of a wolf on its body. It was first played in New York City for a Hells Angels Show. The guitar was sold for $1.9 million in an auction in 2017 making it 5th on the list of most expensive guitars. 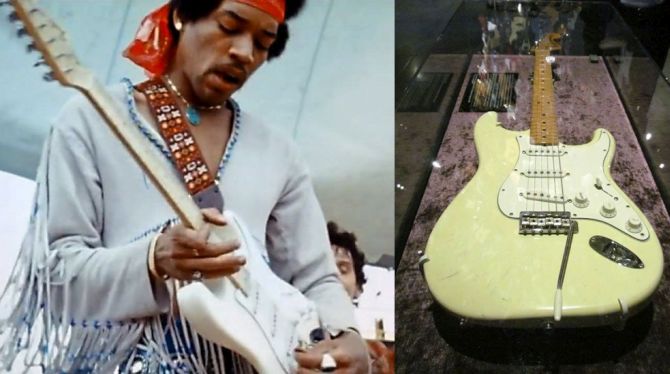 Jimi Hendrix is undoubtedly one of the most influential guitarists in history. His 1968 Fender Stratocaster is one of the most popular guitars which he played at the 1969 Woodstock music festival. To play this stock right-handed Stratocaster with Olympic White finish, Hendrix flipped the guitar over and reversed the strings. The iconic performance of ‘The Star-Spangled Banner’ at Woodstock with this guitar made it such a valuable piece. This Woodstock Stratocaster was purchased by Paul Allen, Microsoft co-founder for $2 million in 1998.

This is one of the guitars which were purchased by Beatles manager for John Lennon and George Harrison on September 10, 1962 for £161.05. Classic Beatles hits such as “She Loves You” and “I Want to Hold Your Hand” were composed on this guitar. Apparently, this 1962 Gibson J-160E got vanished in 1963 to resurface back in 2014. It was sold for a record-breaking price of $2.4 million at Julien’s auction. 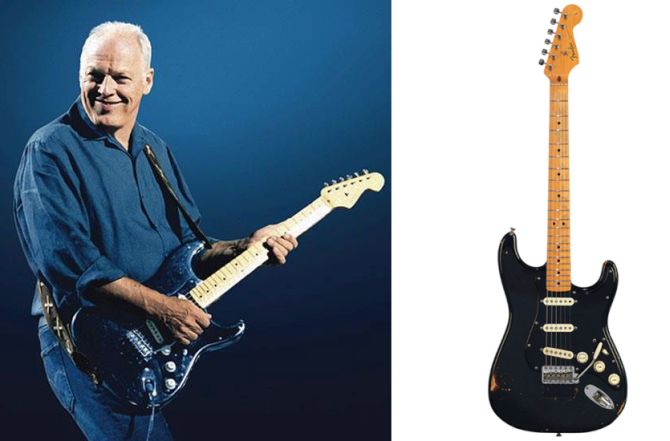 The 1969 black Fender Stratocaster owned by David Gilmour became the most expensive guitar ever to be sold at an auction in 2019. This guitar has been used on albums such as ‘The Dark Side of the Moon’, ‘Wish You Were Here’, ‘Animals’ and ‘The Wall.’ This guitar was auctioned at Christie’s in New York for a world-record price of $3,975,000. The benefits of the sale went to ClientEarth, an environmental law charity.