If you have ever wished of understanding the meows and purrs of your beloved cat, your yearning has been granted. adam&eveDDB, a creative communications agency has come up with a hi-tech 3D printed collar for cats that can translate their meows into human speech. Dubbed Catterbox, the smart wearable for felines is claimed to be the world’s first talking cat collar by its makers. To give cats a voice and to bring them closer to their owners, adam&eveDDB set up The Temptations Lab in 2015. The task was to infuse some serious fun into cats’ lives and make people understand them better.

Developed for Temptations cat treats, the collar embedded with a digital sensor is just like the one you might have seen in Disney Pixar’s Up. The Temptations Lab team analyzed cat sounds and created a program that detects a cat’s meow and matches it to a human voice. For a better understanding, Catterbox is loaded with a dictionary of cat purrs, meows and various other sounds. Thus, owners can expect a meaningful response for their feline friends and serve them accordingly. As studies have shown that cats only meow in order to communicate with humans, we can generally expect instructions such as ‘feed me’, ‘love me’ and ‘worship me’.

The smart collar for cats can be paired with a smartphone via an app. Delivered in a British accent, the playful responses are can be set in a voice of the owner’s choice. You can go through few sample responses, most of which are quite hilarious on the company’s YouTube channel. A prototype of Catterbox- world’s first talking cat collar has been launched in the US and New Zealand. 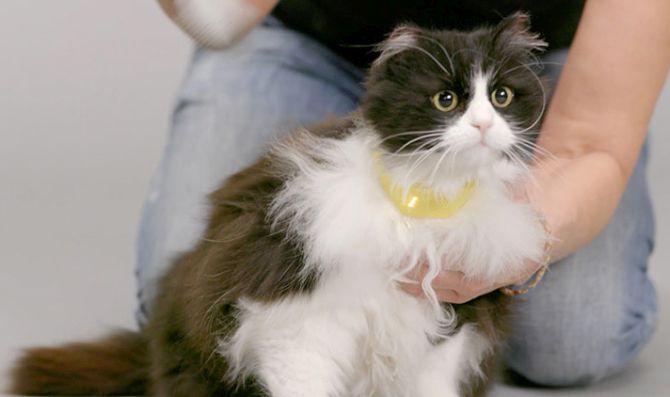