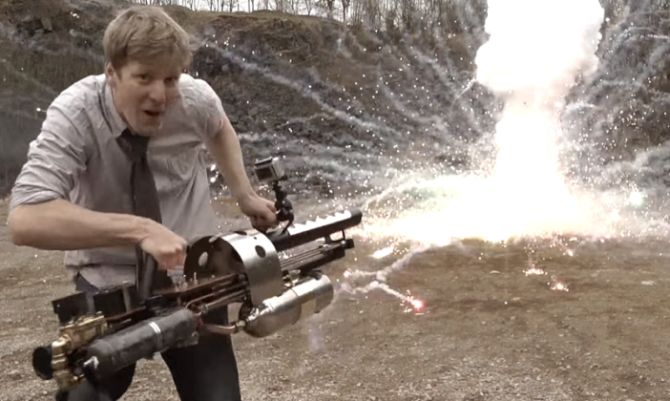 If you have heard of Colin Furze, then you’ll certainly know what a crazy guy he is. Well, if you haven’t heard of him, let us brief you about him. Colin Furze is a British garage inventor, stuntman, filmmaker and YouTuber who love to do all the insane stuff that come to his mind. And, of course he loves to share it with the world. From creating a firework rocket launcher to Flamethrower Scooter, this 37-year-old world record holder from Lincolnshire, England has become a famous internet sensation over the period.

Colin is back again with his latest video in which he demonstrates a homemade Thermite launcher. Thermite is a pyrotechnic composition of metal powder fuel and metal oxide which when ignited by heat can create brief bursts of high temperature in a small area. Well, needless to say, a perfect material for Colin Furze to try something insane. He does not simply place Thermite; instead he launches it with his super steampunk style launcher. Well, that sounds like him. 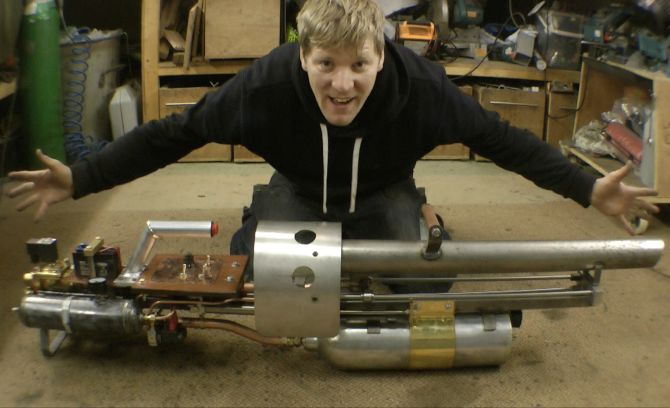 Videos launched on his YouTube channel earlier this month shows part 1 and part 2 of the Making of Thermite Launcher. Well, now he has launched a new video that shows him demonstrating the launcher. He is seen testing the finished cannon by firing at a can of gasoline and at a box of fireworks to create an explosion. You can check the construction process in the video below. However, as insane and fun it looks, this stunt is extremely dangerous. So, please don’t try this at home or anywhere else.