Last year, we heard that Facebook chief executive Mark Zuckerberg was planning to add dislike button to the social network. Later Facebook claimed that the thumbs down button is rather inappropriate or possibly abusive. Instead the infamous social networking site decided to squeeze down human emoticons into six emoji alternatives called Reactions, along with the well-known like button. These moving ‘Reactions’ are considered to more expressive and recognizable worldwide; now they’re able to move. What else avid Facebook users could ask for? 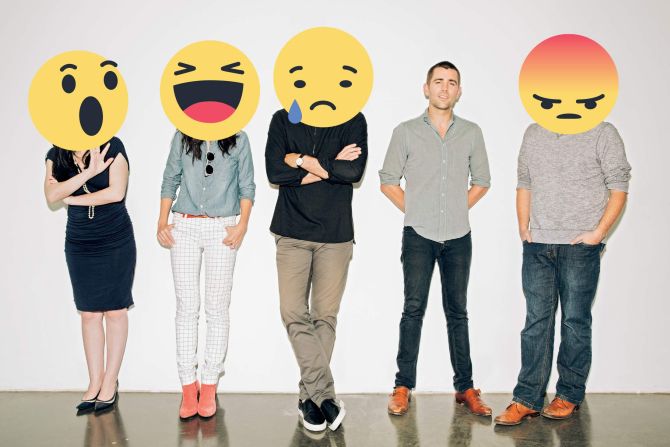 The new emojis will be ‘love,’ ‘haha,’ ‘yay,’ ‘wow,’ ‘anger,’ and ‘sad.’ These dramatic emoticons will be released worldwide in few weeks. The Reaction’ will pop-up on mobile by tapping on the like button, and on desktop by simply hovering over the like button. You can see these reactions at bottom of the status update to see your friends reaction towards anything you share on your timeline.

Although it is being said that Facebook will remove the names of people that liked the status, but on hovering on desktop or tapping on mobile can reveal the names. So, there’s hardly any change there. The new reactions will add more excitement to your conversation and already stirring people’s mind that how the experience is going to be.

Facebook will also be tweaking the new emoji very soon, so in the future we might see them open up just like to third-party artists, similar to Messenger emoticons.This will be an interesting experiment to see people’s behavioral changes and how they express themselves with multiple reactions. Facebook always come up with something new and interesting for its users. May be this is the reason it is still at its peak and continues to grow each year. We’re looking forward to see what new this world popular social site has in its kitty for the users this year.