The 2015 Frankfurt Motor Show is just a couple of days away with automakers from around the globe ready to unveil their latest vehicles and concepts at the event. Bentley, British luxury carmaker has released the details and images of its upcoming SUV which is all set to debut at the motor show. Dubbed Bentayga, Bentley is claiming it to be the world’s fastest SUV with a top speed of 301 km/h (187mph). Also advertised as the most powerful SUV, the Bentayga is powered by a 6.0-litre twin-turbocharged W12 gasoline engine, which provides 600hp and 664 lb-ft of torque.

The interiors are handcrafted by company’s experts in Crewe to offer an elegant and refined look to the vehicle. It comes with an 8” Touchscreen for displaying key information of your choice. The rear headrests feature two 10.2” entertainment tablets that connect the passengers to the vehicle’s entertainment systems. For connectivity, Bentayga SUV will offer 4G Wi-Fi hotspot which will keep you connected to the outer world. The Naim for Bentley audio system is driven by a 1920 watt 21-channel amplifier and is one of the most powerful audio systems available in an SUV. 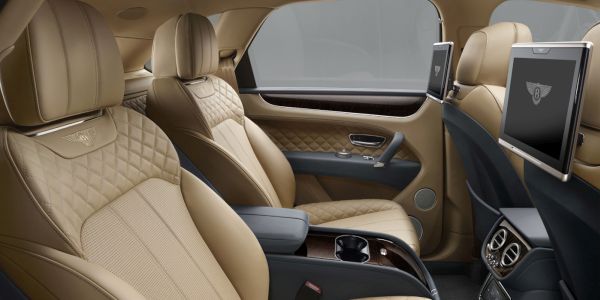 The world’s fastest SUV will make its official debut at the 2015 Frankfurt Motor Show with an expected price tag of £130,000.